Stay up to date on all of the most important news in Georgia Wrestling!!

Beginning last week, we started to take some time and recognize the outstanding accomplishments of our Georgia wrestlers while competing at Fargo.  This year marked the 50th anniversary of Junior Nationals being contested, and this year proved to be the biggest tournament ever by the amount of participants.

This week we will focus on our outstanding Women's Teams!  These young ladies came to compete!  Georgia had 8 wrestlers compete in the 16U Women's division and 12 wrestlers competing in Juniors, but there were a few who really stood out.  The following wrestlers made it all the way to the blood round.  This means they were one match away from being on the podium and finished in the top 12:

Next week our focus will be on our Junior Men's groups.  We look forward to highlighting their achievements in the same manner.

A HUGE thanks to all the parents for everything they do for their wrestlers.  Sometimes, it's the things unseen that provide the support that pushes our kids to the next level!

The Following wrestlers became All-American in Freestyle and/or Greco Roman. Since none of these would have accomplished this incredible feat alone, it was important to acknowledge and include their parents, because without them, this would never have been possible!! 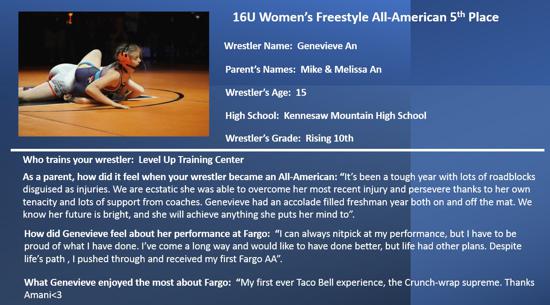 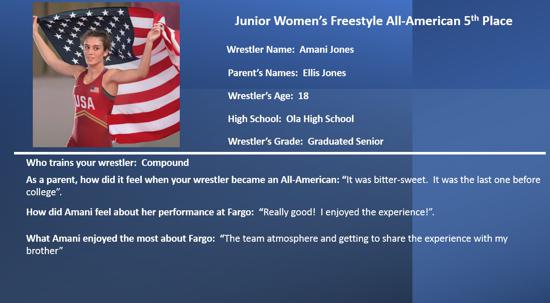 For seasonal schedules & event information, please look at updated flyers.  Information may change as we go through the season and get closer to an event.

Team Georgia is an all volunteer organization and is always looking for volunteers.  If you are willing to volunteer a few hours a year or a few hours a week, please let us know.  Click here to send us your information.

Wrestling is perhaps the purest form of athletic competition to exist in the realm of organized sports. There are no bats or balls, or pucks or sticks. No pads or helmets or jerseys. There's no time to rethink strategy, regroup, or even to catch your breath. There's only you, and your opponent of equal weight and size. Experience, preparation and the will to succeed will determine the victor. There's no doubt about it, wrestling tops the list of intense, highly-competitive sports.

Click the donate button below to help support our athletes in achieving their Olympic Dreams.  All donations are tax deductible.  Georgia's Olympic hopefuls